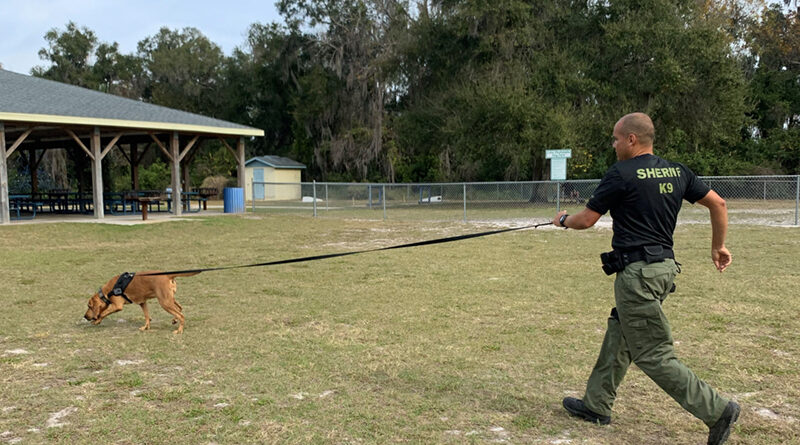 On January 26, 2020, while conducting an investigation in reference to a reckless driver involving a firearm, in the area of Lake Panasoffkee, FL, I came in contact with the driver of the suspect vehicle.  According to the complainant, she was involved in a verbal argument with the suspect over his driving.  During the argument, the complainant advised she possibly saw the suspect place a gun on his lap, but she was not certain.  After the complainant left the area, I located a vehicle matching the description given via radio dispatch.  As I followed the vehicle it pulled into a driveway and parked.  I then observed the driver who also matched the description given by dispatch.  I then made contact with the driver who confirmed he was involved in the reckless driving incident. Upon checking his driver’s license status, the results showed his license was suspended and notice was given by the court.  As I asked the suspect to exit the vehicle to be placed in custody he began to flee on foot.  During the chase we jumped several fences, running approximately three blocks. The suspect then began to gain distance and disappeared into the darkness. 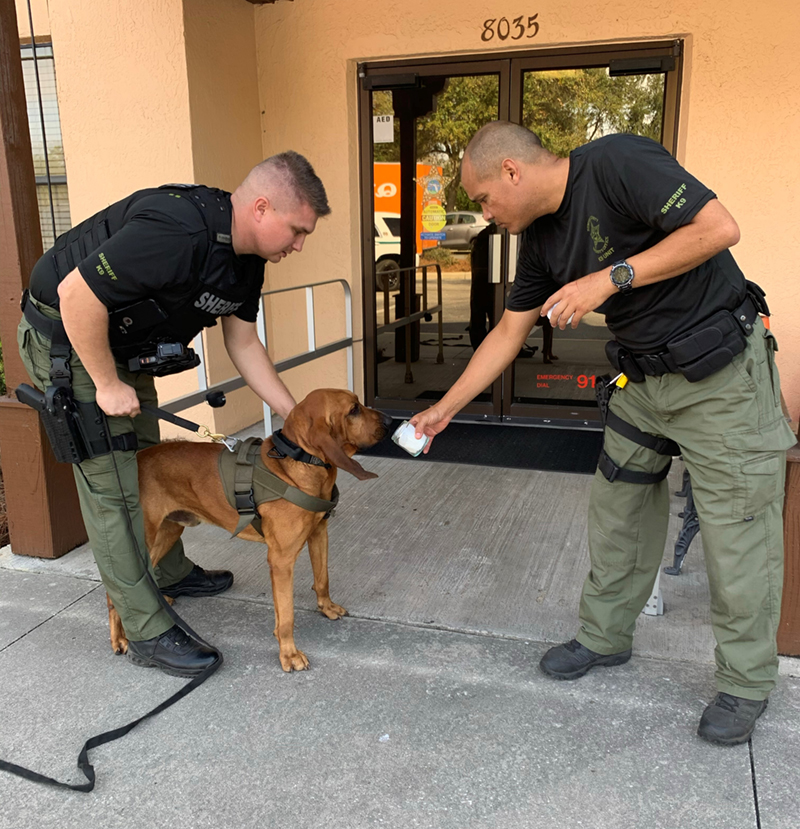 After setting a perimeter I was able to deploy K-9 Bloodhound Charlotte.  A scent article was collected at the scene and presented to K9 Charlotte. We began trailing northbound in the direction I saw the suspect last.  We then reached a cluster of electrical boxes. K9 Charlotte sniffed one of them and changed direction going eastbound.  She then continued to trail over the short grassy area which led to a small paved road where she began trailing north along the boat ramp fence.  As we passed the gate leading into the dock, K9 Charlotte began to display her proximity alert by wagging her tail.  At this time, I warned the other deputy assisting me on the search that the suspect was close. We then reached the end of the fence where Charlotte stopped trailing.  After a canvass of the area, the suspect was not located.

After Charlotte’s deployment, I returned to the area where Charlotte had taken me.  I continued to search the area with other deputies with negative results.  As I continued searching, we heard yelling and screaming coming across the river approximately 150 yards away.  We remained quietly in the area and heard pleas of help coming from the other side of the river.  After requesting the airboat unit, several deputies were sent to locate the suspect.  As they approached the marshy area, the suspect was located holding on to a tree.  As the deputies ordered the suspect to walk towards the airboat, he began to run away from the deputies who gave chase through chest-high muddy water.  Shortly after, the suspect was apprehended and transported to the Sumter County Detention Center.  The suspect was medically cleared at the scene where he complained of having sore feet.  Suspected stated he lost his shoes in the swamp and was walking barefoot the entire time.

January 11, 2020, Sumter County Sheriff’s Deputy Matta and his scent discriminate bloodhound, K9 Charlotte, responded to a missing 11-year-old call. Dep. Matta and K9 Charlotte, along with backup, Deputy Harm, deployed from the location where the missing juvenile was last spotted. Using scent collected at the scene, K9 Charlotte began trailing at a full sprint. “We followed Charlotte for approximately 65 yards running behind her when she made a right turn darting behind a large bush. I observed Charlotte in a sitting position next to the juvenile,” stated Dep. Matta.

Deputy Matta, bloodhound Charlotte, and the Sumter County Sheriff’s Office had recently completed specialized Scent Discriminate K9 and Missing Person Response Training as part of the Bringing The Lost Home Project, a bill which was passed by Florida legislators and signed by Gov. Ron DeSantis is June 2019.

The scent discriminate K9 training component of the Bringing The Lost Home Project provided K9 training to the department’s bloodhound team to enhance the dog’s capabilities of trailing a person’s unique scent. Scent Evidence K9 CEO, Paul Coley, who conducted the training for Sumter County, also developed the training program which is yielding higher missing person location results for agencies, especially in communities like The Villages, which have large elderly populations with Alzheimer’s Disease and Dementia. Studies show that 60% or 3 in 5 people with Alzheimer’s Disease will wander and go missing. “Sheriff Farmer is helping to lead the way in creating safer communities for Florida’s growing elderly population and others at risk of wandering,” stated Coley. Florida currently has over 540,000 people diagnosed with Alzheimer’s Disease and that number is expected to grow to 720,000 by 2025.

In addition to strengthening their K9 search capabilities, Sumter County has also implemented 2 programs aimed to proactively protect communities by raising missing person awareness and preparing at-risk wandering populations before they go missing. The Scent Kit® program allows individuals, families, and caregivers to pre-collect the scent of the person and store it before they go missing. Having a Scent Kit® prepared in advance gives responders the ability to begin searching immediately with an uncontaminated scent article. The kits increase the location success of K-9 teams while decreasing the time it takes to find them and bring them home safe. The kits also allow for quick deployment by law enforcement when every minute counts. “Scent Kits save lives and money,” stated Sumter County Lt. Robert Siemer. The Sumter County Sheriff’s Office will distribute 1000 Scent Kits® to those in need with Alzheimer’s Disease or autism as part of the Bringing The Lost Home Project.

“We have also added Scent Evidence K9’s Rex the Rescue Pup products as part of our department’s outreach activities to promote missing person awareness and child safety education for our community’s youngest citizens,” stated Sheriff Farmer. The American Pediatric Association states that almost 50% of children with autism will wander at least once before age 17.

“The commitment and drive of the Sumter County Sheriff’s Office to learn these new search response techniques is already saving lives,” stated Coley. “The day to day dedication of Sgt. Clark, Lt. Siemer, Maj. Breeden, Chief Haworth, and Sheriff Farmer to protect the community they serve is a benchmark for public safety processes. 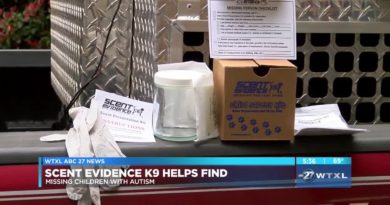 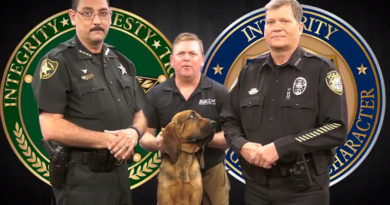 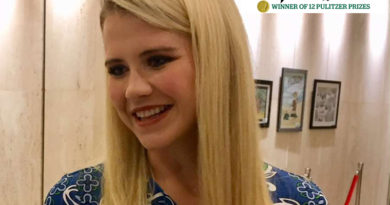